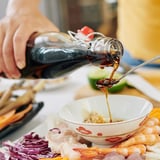 No matter what skill level you’re at, cooking delicious meals with minimum waste (and when you’re on a budget) is never an easy thing to accomplish. Ingredients cost a lot of money, exact recipe quantities can be hard to come by, and sometimes it’s hard to know where to start. That’s where Mob Kitchen comes in. Through short TikTok videos, Instagram reels, and recipe books, the company helps to make the idea of cooking accessible, and it regularly shares exciting new recipes that anyone can try. We caught up with MOB’s food producer, Seema Pankhania, to find out all there is to know about reducing food waste, documenting the process, and deciding where to start. Read on to discover her top kitchen hacks.

Recipes can often contain specific quantities of products that might be hard to get from just one serving, resulting in food waste. Minimising waste is something that Pankhania tries to do when creating new recipes, by using only the quantities that are available when you purchase ingredients. “For example, if it was cream, I’ll try to always use the measure of cream that you get [in supermarkets]because I know cream is something that you wouldn’t necessarily use a lot of and then you’ll just throw it in the bin. Things like that I try to consider when I’m cooking, if you’re using spring onions, use a whole bunch of it. If you’re cutting peppers, use three instead of one because they come in packs of three.”

Too much of one ingredient can often be the thing that ruins it and according to Pankhania, soy sauce is one of the main ingredients that people get wrong. “Soy sauce is salty and so many times you can end up putting too much over your dish, especially if you’re putting it at the end,” she explained, adding that “Kikkoman soy sauce bottles, they come with a special lid and it’s to make sure that you can be precise with how much soy sauce you’re putting in. If you hold the end of the lid it creates a vacuum or something like that, and then nothing will come out, so you can be super precise! I keep the lids and if I buy a different soy sauce bottle I’ll just use this lid.”

Pick Your Fave Cuisines and Go All Out

A lot of people struggle to try new recipes because they often end up needing to buy copious amounts of ingredients that end up costing a lot of money, or that then go to waste after cooking the one dish. Pankhania’s advice, particularly for beginners, is to pick one or two main cuisines, and ensure you bulk buy the ingredients needed accordingly. “If you choose Chinese food, then just get the ingredients you need for that [cuisine]. If we’re at home and making a curry, for example, I have all the spices, it’s probably going to cost me only two pounds to make a curry because I’ve already got everything. All I need to buy is maybe some chicken and some veg. So if you use that concept for the cuisines you like the most, a lot of the time, you just have to buy a big bottle of soy sauce, mirin, sake, and then you can make a lot of the things.”

Getting adventurous with cooking can be difficult if you don’t have all the ingredients to hand, or know where you can get them. Pankhania’s advice is essentially, to give it a go anyway! She said that “if you see a recipe and you think, ‘I don’t have this or I don’t have that’, don’t think you can’t make it. Just Google substitutes and half the time, you can find the substitutes in your house, or you can just leave them out and it’ll be fine.”

To Document Your Process, You’re Going to Need Natural Light

For budding producers or food bloggers, the key to capturing clean content is simple: natural light. Pankhania said that “You need natural light, that’s the main thing” and added that “if you’re cooking and everything steams up, get a mini desk fan and fan away the smoke so that it doesn’t fog up your screen.”