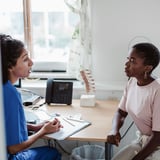 On 16 June, Dame Lesley Regan was appointed as the first ever Women’s Health Ambassador in England. In a time where it feels like women’s rights are being stripped from underneath us and our health being neglected, the idea of an ambassador solely dedicated to providing for women’s-specific health needs and closing the gender health gap is music to our ears. But what exactly does this role entail, and how will it impact health services in England? We’re here to explain.

What Is a Women’s Health Ambassador?

First, we should introduce who Dame Lesley Regan is and exactly why she’s great for this role. Regan is a gynaecologist and professor of obstetrics and gynaecology at Imperial College London. She has over 40 years’ experience in women’s health, with special interests including gynaecological surgery, miscarriage, menopause, and period-related problems. Speaking with Woman’s Hour, Ragen says that, in a nutshell, she wants to “reset the dial for women’s health” and “recognise that women have been repeatedly disadvantaged by the way health services are set up.”

This role is a first for England and has been introduced to help implement the government’s Vision for the Women’s Health Strategy for England, released in December 2021. It outlines priority areas for improvement, funding, and research, including: menstrual health and gynaecological conditions; the menopause; mental health; and fertility, pregnancy, and pregnancy loss.

For Regen, it’s all about access and “finding solutions for common problems,” she tells Woman’s Hour. She’ll work with a deputy ambassador, and the government reports that Ragen will “leverage her networks ensuring the scale of change needed”. She is “currently exploring” what powers she has to implement certain strategies.

So, Why Is a Women’s Health Ambassador Important?

The main reason is to help close the gender health gap (supporting women of all ages throughout their life) as well as helping to eradicate medical bias – and there are many ways of achieving this. Often, there are quite simple ways of doing so if funding is allocated and invested sensibly and empathetically.

Despite women making up 51 percent of England’s population, we’re still completely left behind when it comes to our health. There is a general lack of understanding and awareness when it comes to our health that comes from a lifetime of underfunded services and insufficient research. With the help of the government and healthcare professionals, Ragen wants to spearhead change in many core areas, including:

It’s a great start, but there’s more to be done.

At the crux of it, having someone who is at the table advocating for women from someone who, not only has medical and professional experience, but also can empathise with women up and down the country, is vital. It means that collective voices are being heard and action is nonnegotiable. If we know one thing, it’s that when it comes to healthcare, actions (and adequately allocated funding) speak far louder than false promises.