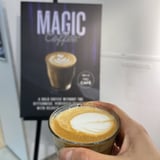 It started with the latte and moved on to the pumpkin spiced frappuccino, but not since the boom of the flat white in 2010 has the coffee scene seen the launch of a new caffeine beverage to tempt us away from our favourites. But all that could be about to change as a trendy new coffee has been causing a stir on social media. In fact, it’s supposed to be so extraordinary that it’s even called Magic Coffee.

Known as “the barista’s choice” in Melbourne, Australia, where the drink was created, this new Magic Coffee claims to be bolder, smoother, and more delicious than the various iterations we are so used to ordering. And it’s being sold for the first time in good old Marks & Spencer.

Coffee is now the most popular drink in the world (after water) with over 400 billion cups consumed each year. A huge £1 billion was spent on coffee in Britain in 2022 as 80 percent of UK adults drink the brew, according to Roast and Post, so it’s fair to say we are a nation of coffee lovers. Whether it’s meeting with a friend, arranging a work catch up, or even going on a first date, “having a coffee” has become a huge part of our social culture. Yet, we are also creatures of habit, so can we really be tempted away from our beloved cappuccinos?

With more and more occasions calling for coffee, it’s no surprise that M&S is getting ahead of the trend as the first UK café to “bring the magic” over from Australia. Over 1,000 M&S baristas have been expertly trained to make the beverage and, since its launch on 11 Jan., M&S cafés have seen an influx of orders.

Clare, the manager of York’s M&S Café, says: “Customers have been really excited about this new coffee. The lead up to the launch created a huge buzz around the coffee and we have had a huge rise in the number of people coming in to try it – especially younger customers who don’t usually come to us for their coffee. We have also converted a lot of people from flat whites to the Magic as it is a lot smoother and just a whole different taste experience.”

As a self-confessed coffee aficionado, I knew I just had to try it for myself. So does this new coffee live up to its name? Or is it just another caffeine fad that just isn’t as good as a flat white?

What Is Magic Coffee?

Served in a 6oz glass or cup, the Magic Coffee is smaller than a Flat White (8oz) and half the size of a Latte (12oz). The biggest difference? It is made with a double shot of ristretto rather than a double espresso. Bear with us.

Espresso is made by forcing hot water through finely ground and closely packed coffee grounds producing a strong flavour that we are used to in espresso shots. Ristretto uses the same amount of ground coffee as espresso, but uses half the water and a shorter extraction time (the time the water passes through the grounds in the “cradle” and into the cup.) Using less water creates a more concentrated flavour, while the shorter extraction time gives a less bitter taste.

The Magic Coffee recipe is simply a 30ml ristretto shot and 5oz of foamed milk. You might be thinking, is there some sort of sorcery involved that has given the coffee its moniker? Does Harry Potter enchant the coffee beans? Sadly, not. It is named as baristas believe it is “the magic ratio of coffee to milk.”

As a coffee lover, and someone who spends a shameful percentage of their monthly wage buying coffees from posh new cafés with exposed brick and leafy plants in every corner, I was both excited and sceptical about a new coffee bursting onto the scene. Especially one claiming to be better than my number one choice. To me, a flat white is coffee perfection. Strong, thanks to the two shots of espresso, and not too milky, thanks to the 120ml of foamed milk.

But here I was, on my way to sample the new kid on the block: the Magic Coffee. Promising to be the trendiest drink launch of the year, I was surprised to be heading, not to a coffee shop in London with a bearded barista and a queue out the door, but instead to my local M&S café.

After making my way past the lingerie section and through rails of knitted sweaters, I arrive at the café and joined the queue to order my caffeine fix. After ordering, I watch with interest as the barista makes my brew, but it all looks very normal to me. Coffee into the machine, out it comes into the cup, and in goes the steamed milk to top it up. So far, so . . . flat white?

I take a seat and take a sip – and this is where the magic actually does happen. While it may look very similar to other coffee faves, there is a very distinct difference, and it’s a welcome one. Yes, that kick of caffeine is still there, but it’s smoother and silkier than I’m used to. I take another sip and I hate to admit, but it just gets better. Where has this coffee been all my life?

I ask the barista, “what have you added to this? Have you used a super fancy milk? What’s the secret ingredient?” But no. It’s just the ristretto technique for coffee brewing.

For non-coffee lovers, this probably isn’t going to convert you. It still packs a punch of coffee flavour with a good hit of caffeine. It’s also smaller than a latte or cappuccino, so won’t suit those who like a large hot drink or to feel they’ve got their moneys worth. But if you are coffee fanatic, or are a latte drinker looking to upgrade your order, then I can’t recommend this highly enough.

Where Can I Get Magic Coffee?

The M&S Magic Coffee costs £3.15 and, while this is slightly more expensive than your regular latte, I’d argue that it is worth the extra 20p. Exclusively available to drink in or take away now in 330 M&S Cafés across the UK. Plus, it can easily be made vegan with stores offering the choice of soy. coconut, or oat milk for no extra cost. If you want to bring a little magic your 2023, head to M&S and get that cuppa in your life.